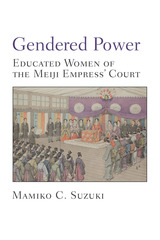 Gendered Power sheds light on the sources of power for three prominent women of the Meiji period: Meiji Empress Haruko; public speaker, poet, and diarist Nakajima Shoen; and educator and prolific author Shimoda Utako. By focusing on the role Chinese classics (kanbun) played in the language employed by elite women, the chapters focus on how Empress Haruko, Shoen, and Shimoda Utako contributed new expectations for how women should participate in a modernizing Japan. By being in the public eye, all three women countered criticism of and commentary on their writings and activities, which they parried by navigating gender constraints. The success or failure as women ascribed to these three figures sheds light on the contradictions inhabited by them during a transformative period for Japanese women.
By proposing and interrogating the possibility of Meiji women’s power, the book examines contradictions that were symptomatic of their struggles within the vast social, cultural, and political transformations that took place during the period. The book demonstrates that an examination of that conflict within feminist history is crucial in order to understand what radical resistance meant in the face of women-centered authority.

AUTHOR BIOGRAPHY
Mamiko C. Suzuki is Assistant Professor of Japanese in the Department of World Languages and Cultures at the University of Utah.
TABLE OF CONTENTS
Contents
Acknowledgments
Introduction
Chapter 1. The Traditional and Modern Education of Empress Haruko and Her Court Women
Chapter 2. From Kishida Toshiko to Nakajima Shōen: A Meiji Classical Chinese Foundation for a Modern Japanese Woman
Chapter 3. Shimoda Utako and the Scandal of the Educated Female Body
Conclusion
Glossary
Notes
Bibliography
Index
REQUEST ACCESSIBLE FILE