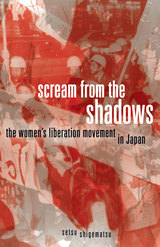 More than forty years ago a women’s liberation movement called ūman ribu was born in Japan amid conditions of radicalism, violence, and imperialist aggression. Setsu Shigematsu’s book is the first to present a sustained history of ūman ribu’s formation, its political philosophy, and its contributions to feminist politics across and beyond Japan. Through an in-depth analysis of ūman ribu, Shigematsu furthers our understanding of Japan’s gender-based modernity and imperialism and expands our perspective on transnational liberation and feminist movements worldwide.

In Scream from the Shadows, Shigematsu engages with political philosophy while also contextualizing the movement in relation to the Japanese left and New Left as well as the anti–Vietnam War and radical student movements. She examines the controversial figure Tanaka Mitsu, ūman ribu’s most influential activist, and the movement’s internal dynamics. Shigematsu highlights ūman ribu’s distinctive approach to the relationship of women—and women’s liberation—to violence: specifically, the movement’s embrace of violent women who were often at the margins of society and its recognition of women’s complicity in violence against other women.

Scream from the Shadows provides a powerful case study of a complex and contradictory movement with a radical vision of women’s liberation. It offers a unique opportunity to reflect on the blind spots within our contemporary and dominant views of feminism across their liberal, marxist, radical, Euro-American, postcolonial, and racial boundaries.

Setsu Shigematsu is assistant professor of media and cultural studies at the University of California, Riverside. She is coeditor of Militarized Currents: Toward a Decolonized Future in Asia and the Pacific (Minnesota, 2010).

Preface: Feminism and Violence in the Womb of Empire

I. Genealogies and Violations
1. Origins of the Other/Onna: The Violence of Motherhood and the Birth of Ribu
2. Lineages of the Left: Death and Reincarnation of a Revolutionary Ideal

II. Movements and Mediums
3. The Liberation of Sex, Onna, and Eros: The Movement and the Politics of Collective
Subjectivity
4. Ribu and Tanaka Mitsu: The Icon, the Center, and Its Contradictions

III. Between Feminism and Violence
5. Ribu’s Response to the United Red Army: Feminist Ethics and the Politics of Violence

Epilogue: Lessons from the Legacy