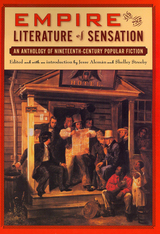 Mid-nineteenth-century American literature teems with the energy and excitement characteristic of the nation's era of expansion. It also reveals the intense anxiety and conflict of a country struggling with what it will mean, socially and culturally, to incorporate previously held Spanish territories. Empire and the Literature of Sensation is a critical anthology of some of the most popular and sensational writings published before the Civil War. It is a collection of transvestite adventures, forbidden love, class conflict, and terrifying encounters with racial "others."

Most of the accounts, although widely distributed in nineteenth-century newspapers, pamphlets, or dime store novels, have long been out of print. Reprinted here for the first time are novelettes by two superstars of the cheap fiction industry, Ned Buntline and George Lippard. Also included are selections from one of the first dime novels as well as the narratives of Leonora Siddons and Sophia Delaplain, both who claim in their autobiographical pamphlets to have cross-dressed as men and participated in the Texas rebellion and Cuban filibustering.

Originally written for entertainment and enormously popular in their day, these sensational thrillers reveal for today's audiences how the rhetoric of empire was circulated for mass consumption and how imperialism generated domestic and cultural instability during the period of the American literary renaissance.
AUTHOR BIOGRAPHY
Jesse Alemán is an associate professor of literature at the University of New Mexico.

Shelley Streeby is an associate professor of literature at the University of California, San Diego.
TABLE OF CONTENTS