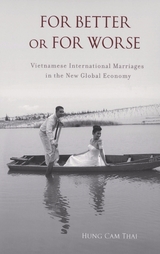 Marriage is currently the number-one reason people migrate to the United States, and women constitute the majority of newcomers joining husbands who already reside here. But little is known about these marriage and migration streams beyond the highly publicized and often sensationalized phenomena of mail-order and military brides. Less commonly known is that most international couples are immigrants of the same ethnicity.

In For Better or For Worse, Hung Cam Thai takes a closer look at marriage and migration, with a specific focus on the unions between Vietnamese men living in the United States and the women who marry them. Weaving together a series of personal stories, he underscores the ironies and challenges that these unions face. He includes the voices of working-class immigrant men dealing with marginalization in their adopted country. These men speak about wanting "traditional" wives who they hope will recognize their gendered authority. Meanwhile, young Vietnamese college-educated women, undesirable to bachelors in their own country who are seeking subservient wives, express a preference for men of the same ethnicity but with a more liberal outlook on gender-men they imagine they will find in the United States.

A sense of foreboding pervades the book as Thai captures the incompatible viewpoints of the couples who appear to be separated not only geographically but ideologically.
AUTHOR BIOGRAPHY
Hung Cam Thai is an assistant professor of sociology and Asian American studies at Pomona College.
REVIEWS
"A tremendously important contribution to the study of gender and migration with its focus on the oft-ignored topic of masculinity."
— Rhacel Salazar Parreñas, author of Children of Global Migration: Transnational Families and Gendered Woes

"This book should be required reading for anyone with an interest in transnationalism, migration, cross-border marriages, or post-war Vietnamese diaspora."
— Nicole Constable, author of Romance on a Global Stage: Pen Pals, Virtual Ethnography and 'Mail Order' Marriages

"This innovative study of marriages between women in Vietnam and Vietnamese men living and working overseas brings the personal and emotional sides of globalization into vivid focus. A beautifully conceptualized and fascinating book."
— Barrie Thorne, University of California, Berkeley