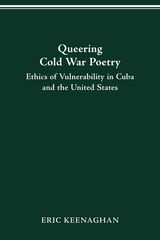 Many feel that individualism, and the security it demands, define democracy and freedom. This belief is characteristic of the attitude that thinkers from John Dewey to Michel Foucault have criticized as "liberalist." In actuality, we share intimate associations with one another through contacts established by our bodies and even by language.
In Queering Cold War Poetry, Eric Keenaghan offers queer theory, queer studies, and literary theory a new political and conceptual language for reevaluating past and present high valuations of individualism and security. He examines four Cold War poets from Cuba and the United States—Wallace Stevens, José Lezama Lima, Robert Duncan, and Severo Sarduy. These writers, who lived in an era when homosexuals were regarded as outsiders or even security threats, offer critiques of nationalism and liberalism. In their struggles against state and cultural mandates that foreclosed positive estimations of vulnerability, Stevens, Lezama, Duncan, and Sarduy radically revised ethics and identity in their day. Their work exemplifies how much modernist poetry disseminates experiences of differences that challenge prevailing attitudes about individuals' relationships to one another and to their nations. Through studies of Cuban and U.S. lyric and poetics, Queering Cold War Poetry clears the way for imagining what it means to belong to a passionate and compassionate citizenry which celebrates vulnerability, searches for difference in itself and each of its constituent individuals, and identifies less with a nation than with a global community.

AUTHOR BIOGRAPHY
Eric Keenaghan is assistant professor of English at The University at Albany, SUNY.
TABLE OF CONTENTS