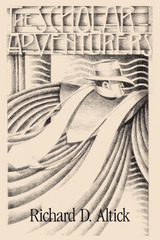 SCHOLAR ADVENTURERS
by RICHARD ALTICK
The Ohio State University Press, 1987
Paper: 978-0-8142-0435-1
"A carefully detailed but by no means dull account of the more dignified pursuit of detection as practiced by literary scholars." --Kirkus Reviews

"Although [Altick' sensibly mentions that research may be a misadventure, he naturally enough plays up its glamour and romance; and its fascination for the scholar is transmitted to the reader. His book, then, as popular reading is first-rate, solid, rewarding, and lively" --The Nation

"This is a volume of gracefully written essays celebrating the feats of literary detective work performed by scores of learned men and women passionately in love with the minutiae of literary scholarships." --The New York Times

"a more fascinating recital than any fictional mystery story, and its detectives are, it leads us to believe, more interesting in themselves--they are not mousy researchers--than fictional private eyes" --The Boston Globe

Richard Altick's classic portrayal of scholars on the prowl has delighted generations of readers. From the exposure of British rare book dealer Thomas Wise--the most famous authority of his day--as a master forger of first editions to the discovery of thousands of new James Boswell papers, Altick shows the scholar at work. Chaucer, Shakespeare, Wordsworth, Shelley, Keats, and many others surrender previously unrevealed secrets to these dogged researchers, whose ceaseless sleuthing has increased our knowledge and appreciation of both literature and the people who created it.

Richard D. Altick is Regent's Professor Emeritus of English at The Ohio State University. He is the author of The English Common Reader, Lives and Letters, To Be in England, Victorian Studies in Scarlet, Victorian People and Ideas, The Shows of London, Paintings from Books, and Deadly Encounters as well as numerous essays on English literature and culture.