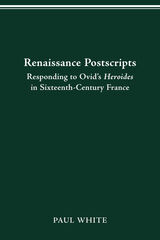 Ovid’s Heroides, a collection consisting mainly of poetic love letters sent by mythological heroines to their absent lovers, held a particular fascination for Renaissance readers. To understand their responses to these letters, we must ask exactly how and in what contexts those readers first encountered them: were they read in Latin or in the vernacular; as source texts for the learning of grammar and history or as love poetry; as epistolary and rhetorical models or as moral examples?

Renaissance Postscripts: Responding to Ovid’s Heroides in Sixteenth-Century France by Paul White offers an account of the wide variety of responses to the Heroides within the realm of humanist education, in the works of both Latin commentators and French translators, and as an example of a particular mode of imitation. The author examines how humanists shaped the discourse of Ovid’s heroines and heroes to pedagogical ends and analyses even the woodcuts that illustrated various editions. This study traces comparative readings of French translations through a period noted for important shifts in attitudes to the text and to poetic translation in general and offers an important history of the “reply epistle”—a mode of imitation attempted both in Latin and the vernacular. Renaissance Postscripts shows that while the Heroides was a versatile text that could serve a wide range of pedagogical and literary purposes, it was also a text that resisted the attempts of its interpreters to have the final word.

AUTHOR BIOGRAPHY
Paul White is British Academy Postdoctoral Fellow in the Department of French, University of Cambridge.
TABLE OF CONTENTS