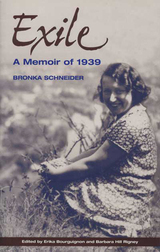 Bronka Schneider and her husband, Joseph, were two of the thirty thousand Austrian Jews admitted as refugees to Great Britain between March 1938 and 2 September 1939. It was not until 1960, however, that Schneider wrote her memoir about the year she spent as a housekeeper, with Joseph as a butler, in a Scottish castle.

Schneider tells of daily encounters—with her employers, the English lady and her husband, a retired British civil servant who had spent many years in India; the village locals; other refugees; and a family of evacuees from the slums of Glasgow.

The editors have divided this memoir into chapters, adding headlines from the London Times as epigraphs. These headlines, reporting the escalating events of World War II, are in stark contrast to daily activities of the residents of this isolated region of Scotland. A commentary by Erika Bourguignon provides historical, political, and cultural background of this period.

AUTHOR BIOGRAPHY
Erika Bourgignon, Bronka’s neice, is professor emeritus of anthropology at The Ohio State University.
Barbara Hill Rigney is a professor of English at The Ohio State University and the author of five other books, including The Voices of Toni Morrison (Ohio State University Press 1994).
REVIEWS
“As the category of ‘Holocaust survivor’ expanded to include those Jews who were not necessarily deported to ghettos and camps, we have had opportunities to explore the phenomenology of surviving with increasing depth. In important ways, Exile: A Memoir of 1939 enriches our understanding of the dailiness of surviving and the complex identities crafted by Holocaust survivors.” —R. Ruth Linden, author of Making Stories, Making Selves