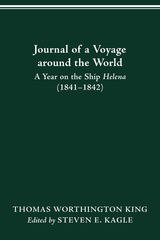 In full and well-written entries, King recounts the routines and surprises of life at sea, where storms and calms could be equally threatening, and the next day might bring a stop at St. Helena to see Napoleon’s tomb or an encounter with pirates. King provides details often missing from histories that give a real sense of the period. In his description of Chile and Peru we learn about activities as diverse as cockfighting and courtship. We learn about produce and prisons, mints and monasteries, fruits and fashions. In his account of China, King vividly describes rivers so full of boats that one could “see no water—nothing but the large mat sales” and calm groves of “green lychee, or broad leaved & rustling plantain.”

Perhaps the most important subject of the diary is the diarist himself, whose talent and confidence develop on the pages of his record. Thomas Worthington King was born and raised in Chillicothe, Ohio, and was the grandson of two Ohio Senators: Rufus King and Thomas Worthington.