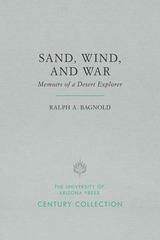 Sand, Wind, and War records the work, travels and adventures of one of the last of the great British explorers, a man who served in both world wars and carved out a special niche in science through his studies of desert sands.

Ralph Alger Bagnold was born in 1896 into a military family and educated as an engineer. Posted to Egypt in 1926, he was one of a group of officers who adapted Model T Fords to desert travel and in 1932 made the first east-west crossing—6,000 miles—of the Libyan desert. Bagnold established such a name for himself that in World War II he was again posted to Egypt where he founded and trained the Long Range Desert Group that was to confound the German and Italian armies.

Bagnold’s fascination with the desert included curiosity over the formation of dunes, and beginning in 1935 he conducted wind tunnel experiments with sand that led to the book The Physics of Blown Sand and Desert Dunes. Eventually, he was to see his findings called on by NASA to interpret data on the sands of Mars. He devoted subsequent research to particle flow in fluids, and also served as a consultant to Middle Eastern governments concerned with the interference of sand flow in oil drilling.
Sand, Wind, and War is the life story of a man who not only helped shape events in one part of the world but also contributed to our understanding of it. It is a significant benchmark not only in the history of science, but also in the annals of adventure.
AUTHOR BIOGRAPHY
Ralph Alger Bagnold (1896–1990) was a British military commander, a pioneer of desert exploration, and an influential scientist.