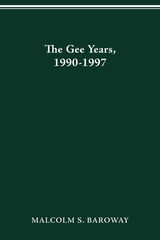 When Gee lost his beloved wife, Elizabeth, to cancer in 1991 and became a single parent, he not only carried on, he carried the university through some of its most exhilarating but contentious times. By 1996, he was so popular, private polls said he could run for Ohio governor—and win—on either ticket. When he, and his new bride Constance Bumgarner Gee, left instead for Brown University in January 1998, they left behind a stronger Ohio State and a string of stories about power brokers, politicians, and just plain Buckeyes. Populated by such figures as Les Wexner and George Voinovich, Andy Geiger and John Cooper, Bernadine Healy and John Glenn, The Gee Years is “inside baseball,” written by a member of Gee’s inner circle, his communications director. From the board room to the press box, from fundraisers to sit-ins, this is the story of a singular academic leader and more than seven years in the history of the complex university he headed.
AUTHOR BIOGRAPHY