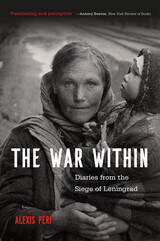 “Stand aside, Homer. I doubt whether even the author of the Iliad could have matched Alexis Peri’s account of the 872-day siege which Leningrad endured.”
—Jonathan Mirsky, The Spectator

In September 1941, two and a half months after the Nazis invaded the Soviet Union, the German Wehrmacht encircled Leningrad. Cut off from the rest of Russia, the city remained blockaded for 872 days, at a cost of almost a million civilian lives. It was one of the longest and deadliest sieges in modern history.

The War Within chronicles the Leningrad blockade from the perspective of those who endured it. Drawing on unpublished diaries written by men and women from all walks of life, Alexis Peri tells the tragic story of how young and old struggled to make sense of a world collapsing around them. When the blockade was lifted in 1944, Kremlin officials censored publications describing the ordeal and arrested many of Leningrad’s wartime leaders. Some were executed. Diaries—now dangerous to their authors—were concealed in homes, shelved in archives, and forgotten. The War Within recovers these lost accounts, shedding light on one of World War II’s darkest episodes while paying tribute the resilience of the human spirit.
TABLE OF CONTENTS
Cover
Title
Copyright
Dedication
Contents
Maps of Leningrad
Directory of Diarists
Abbreviations and Acronyms
Introduction: Year Zero
Part I: Inside the Ring
Chapter 1. The Ring Takes Shape
Chapter 2. Becoming New People
Chapter 3. The Elusive I
Chapter 4. Family Life and Strife
Part II. Exploring the Island
Chapter 5. The Hierarchy of Lives
Chapter 6. The City as Medical Laboratory
Chapter 7. In the Mirror of History
Conclusion: After the Ring Broke
Notes
Selected Bibliography
Acknowledgments
Illustration Credits
Index