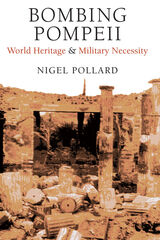 Bombing Pompeii examines the circumstances under which over 160 Allied bombs hit the archaeological site of Pompeii in August and September 1943, and the wider significance of this event in the history of efforts to protect cultural heritage in conflict zones, a broader issue that is still of great importance. From detailed examinations of contemporary archival document, Nigel Pollard shows that the bomb damage to ancient Pompeii was accidental, and the bombs were aimed at road and rail routes close to the site in an urgent attempt to slow down the reinforcement and supply of German counter- attacks that threatened to defeat the Allied landings in the Gulf of Salerno. The book sets this event, along with other instances of damage and risk to cultural heritage in Italy in the Second World War, in the context of the development of the Allied Monuments, Fine Arts, and Archives – the “Monuments Men.”
AUTHOR BIOGRAPHY
Nigel Pollard is Associate Professor in the College of Arts and Humanities at Swansea University.
REVIEWS
"The wealth of detail is prodigious, including five Appendices relating to the raids themselves, fifty five pages of notes and six pages of bibliography. It is all nevertheless presented in an eminently readable and punchy way, with many enlivening individual anecdotes. P. is also scrupulous not to import into 1943 the sensitivities and prejudices of 2020." - Roger Barnes, Classics for All
— Roger Barnes, Classics for All