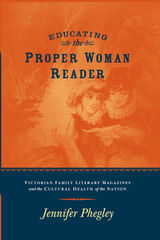 While many scholars have explored the ways nineteenth-century critics expressed their anxiety about the dangers of women’s unregulated and implicitly uncritical reading practices, which were believed to threaten the sanctity of the home and the cultural status of the nation, Phegley argues that family literary magazines revolutionized the position of women as consumers of print by characterizing them as educated readers and able critics. Her analysis of images of influential women readers (in Harper’s), intellectual women readers (in The Cornhill), independent women readers (in Belgravia), and proto-feminist women readers/critics (in Victoria) indicates that women played a significant role in determining the boundaries of literary culture within these magazines. She argues that these publications supported women’s reading choices, inviting them to define literary culture rather than to consume it passively.

Not only does this book revise our understanding of nineteenth-century attitudes toward women readers, but it also takes a fresh look at the transatlantic context of literary production. Further, Phegley demonstrates the role these publications played in improving cultural literacy among women of the middle classes as well as the interplay between fiction and essays of the time by writers such as Mary Braddon, Charles Dickens, George Eliot, Elizabeth Gaskell, G. H. Lewes, Harriet Martineau, Margaret Oliphant, George Sala, William Thackeray, and Anthony Trollope.