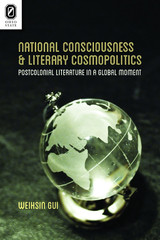 National Consciousness and Literary Cosmopolitics: Postcolonial Literature in a Global Moment by Weihsin Gui argues that postcolonial literature written within a framework of globalization still takes nationalism seriously rather than dismissing it as obsolete. Authors and texts often regarded as cosmopolitan, diasporic, or migrant actually challenge globalization’s tendency to treat nations as absolute and homogenous sociocultural entities.
While social scientific theories of globalization after 1945 represent nationalism as antithetical to transnational economic and cultural flows, National Consciousness and Literary Cosmopolitics contends that postcolonial literature represents nationalism as a form of cosmopolitical engagement with what lies beyond the nation’s borders. Postcolonial literature never gave up on anticolonial nationalism but rather revised its meaning, extending the idea of the nation beyond an identity position into an interrogation of globalization and the neocolonial state through political consciousness and cultural critique.
The literary cosmopolitics evident in the works of Kazuo Ishiguro, Derek Walcott, Shirley Geok-lin Lim, Preeta Samarasan, and Twan Eng Tan distinguish between an instrumental national identity and a critical nationality that negates the subordination of nationalism by neocolonial regimes and global capitalism. Through their formal innovations, these writers represent nationalism not as a monolithic or essentialized identity or body of people but as a cosmopolitcal constellation of political, social, and cultural forces.
AUTHOR BIOGRAPHY
Weihsin Gui is assistant professor of English, the University of California, Riverside.