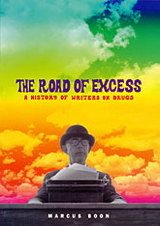 From the antiquity of Homer to yesterday's Naked Lunch, writers have found inspiration, and readers have lost themselves, in a world of the imagination tinged and oftentimes transformed by drugs. The age-old association of literature and drugs receives its first comprehensive treatment in this far-reaching work. Drawing on history, science, biography, literary analysis, and ethnography, Marcus Boon shows that the concept of drugs is fundamentally interdisciplinary, and reveals how different sets of connections between disciplines configure each drug's unique history.

In chapters on opiates, anesthetics, cannabis, stimulants, and psychedelics, Boon traces the history of the relationship between writers and specific drugs, and between these drugs and literary and philosophical traditions. With reference to the usual suspects from De Quincey to Freud to Irvine Welsh and with revelations about others such as Milton, Voltaire, Thoreau, and Sartre, The Road of Excess provides a novel and persuasive characterization of the "effects" of each class of drug--linking narcotic addiction to Gnostic spirituality, stimulant use to writing machines, anesthesia to transcendental philosophy, and psychedelics to the problem of the imaginary itself. Creating a vast network of texts, personalities, and chemicals, the book reveals the ways in which minute shifts among these elements have resulted in "drugs" and "literature" as we conceive of them today.

Reviews of this book:
Instead of providing a chronological history of drugs in literature, Boon offers a sprawling, extensively researched work that explores the "more subtle, micropolitical histories of everyday interactions between human beings and particular psychoactive substances." Each of the book's five chapters focuses on writers'and works associated with a particular class of drugs...This is a solid work of scholarship.
--William D. Walsh, Library Journal

Reviews of this book:
Writers have been taking drugs as long as there have been drugs to be had, and--as we learn from Marcus Boon's fascinating and meticulous The Road of Excess--the line is blurred, in fact invisible, between those writers who take drugs to inflame or exalt their demons and those who simply need, in Aldous Huxley's phrase, "a chemical vacation from intolerable selfhood"...The Road of Excess does the field of drug studies a great service by providing a clear narrative of literature's long romance with drugs, and by relating each substance to a specific creative enterprise.
--James Parker, Boston Globe

Reviews of this book:
The Road of Excess...focuses on the external conditions that prompted some of the world's most famous storytellers to smoke, snort and swallow their way to notoriety...By providing social, economic, ethnographic, scientific, and religious perspective as the foundation of his observations, Boon realizes his mandate by offering fascinating context and insight to a timeline that dates back to Homer's Odyssey.
--Nick Krewen, Toronto Star

Reviews of this book:
Boon's observations speak as much to our scientific understanding of the brain as to our literary appreciation of writers like Henri Michaux and Charles Baudelaire, William Burroughs and Will Self, and they deserve close criticism. This alone makes Boon's ironic and perceptive book very welcome: It is that rare creature, a work of literary criticism that the scientific community can enjoy, contend with, and from which it can draw inspiration.
--Simon Ings, New Scientist

Reviews of this book:
Marcus Boon...tilled the well-seeded territory of druggy writers...and now brings it to fruition in The Road of Excess...His feat suggests that even in a literature department, a lively empirical topic can survive years of deconstructive indoctrination and cultural-studies overkill...Boon's enterprising research soon takes the reader to intoxicating places...He proceeds incisively, his double-helix narrative intertwining a fine strand of scholarly detail with an ongoing argument for transcendental subjectivity's importance to literature--so powerful an influence it almost behooves writers to experiment with drugs...The most arresting strain of Boon's book is thus its vast historical sweep. Like the pal in the park believed to have "tried everything," Boon appears to have read everything concerned with writers and drugs.
--Carlin Romano, Chronicle of Higher Education

Reviews of this book:
For the British romantics--Keats, Byron, Coleridge, Shelley, de Quincey--it was opium. For Proust, Guy de Maupassant and William James, it was anesthetics--either and nitrous oxide. Balzac, Coleridge, Rimbaud, Yeats and the Beats all smoked, ate and drank cannabis. Balzac's speedy writing was fueled by vast quantities of caffeine; Kerouac chewed Benzedrine to hurry his typing. Then there are such famous names as Leary, de Kooning, Bowles, Thompson and, of course, the king of literary druggies, William S. Burroughs, those day trippers who happily wrote while consuming all manner of psychedelics--peyote, mescaline, acid. All this social, literary and pharmaceutical history is considered in a thoughtful but engaging style by Marcus Boon.
--Dan Smith, Toronto Star

Reviews of this book:
Boon has written the most useful and engaging history of psychoactive lit yet. His prose is generous, unhurried, and far too tasteful to gob up the page with theory. At the same time, he casts his net deep and wide, drawing in folks as disparate as Chaucer, Kant, and Iceberg Slim. Boon is not content to merely record the encounter between modern writers and drugs; he deepens the story as well, and, amazingly, he does it without exploiting the rhetoric of personal experience or subversive hip.
--Erik Davis, Bookforum

Reviews of this book:
The first thing to say about Marcus Boon's Road of Excess is that he has certainly done the research...This [is a] valuable, philosophically provocative and sometimes quite moving work of literary criticism...Boon has read everything from Homer's Odyssey, with its description of the lotus plant, to the underground comics of Robert Crumb. And he can step outside literature to show a knowledge of a far wider cultural world.
--Steven Rosen, Denver Post and Rocky Mountain News

Reviews of this book:
This meticulous exploration of the influence of narcotics on literature is like a late-night literary overdose...[Boon's] academic background shines through without bogging down this intriguing subject...The Road of Excess is broken down into five sections based on a specific realm of drug: opiates, anaesthetics, cannabis, stimulants (coffee, cocaine and amphetamines) and psychedelics. There is a historical logic to the structure that reflects both the social norms and the scientific discoveries of the time. It is this that makes Excess a riveting read as Boon describes the high-fashion accessory of hand-crafted syringes to inject morphine in public or the introduction of opium via Chinese workers in Europe. Boon has explored the cultures around his literary figures with methodical devotion, creating a colorful, if at times, frightening sense of time and place...[Boon's] writing is largely a clear, calm and extraordinarily researched discussion of strange visions, odd lives and often marvelous writing.
--Ashley Crawford, The Age

Reviews of this book:
In an impressive display of scholarship, Boon meticulously chronicles the connection between writers and drugs. From Samuel Taylor Coleridge to Jack Kerouac, writers' personal odysseys into the dizzying world of drugs are depicted with a novelist's eye for detail. Boon...creates order of this heretofore largely uncharted history in five well-rounded essays examining how literature has been influenced by narcotics, anesthetics, cannabis, stimulants, and psychedelics. Through liberal use of anecdotes, Boon helps transform what could have been a dry recitation of cultural and literary artifacts into a feast of historical surprises...Though it is a scholarly endeavor, Boon's new work reads more like a wide-eyed, joyous romp through a literary statesman's funhouse, where each room contains a masterfully told tale of opium or morphine, peyote or LSD, coffee or cocaine. We see a gallery of our most prized literary lions, many of them stripped bare of their pristine reputations. It is a mind-teasing exercise that is well worth the trip.
--Rebecca Shannonhouse, Boston Globe

Reviews of this book:
A scrupulously researched and splendidly written tome that is a joy to read and a challenge to digest.
--Gordon Phinn, Books in Canada

The book's foundational strength is its scholarship. He uses citations not only for traditional scholarly support, but to delight, astonish, and engage the reader. It's too bad that bibliographies are out of fashion these days, since Boon's is a gem. He's done his homework several times over. He is a man after my own heart with his methodological bricolage, applying political, psychological, medical, anthropological and theological tactics according to the needs of the situation. The book is written in a buoyant tone, full of energy and excitement whether disclosing a juicy fact or working through a knotty argument. Although it is clearly an academic book, in the sense that it has footnotes and high scholarly standards, it could be enjoyed by any reader with an interest in literature - or drugs. When it finds unknown ground it is exciting, and when it recrosses more familiar zones it always finds a way to renew interest in them.
--David Lenson, author of On Drugs and Professor of Comparative Literature at the University of Massachusetts

The Road of Excess is a superbly researched and lucidly written compendium of fascinating information. It brings to light a history that has heretofore been largely repressed and details the enormous impact of drugs and altered consciousness on European and American literary cultures.
--Nicholas Bromell, Professor of English, University of Massachusetts
TABLE OF CONTENTS