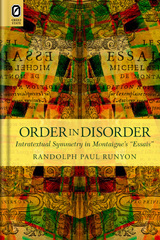 Montaigne’s Essays are treasured for their philosophical and moral insights and the fascinating portrait they give us of the man who wrote them, but another of their undoubted delights is that they tantalize the reader, offering beneath an apparent disorder some hints of a hidden plan. After all, though the essayist kept adding new pages, except when he added the third and final book he never added a new chapter, but worked within the structure already in place.

Order in Disorder: Intratextual Symmetry in Montaigne’s “Essais,” by Randolph Paul Runyon, offers a new answer to the question of how ordered the Essays may be. Following up on Montaigne’s likening them to a painter’s “grotesques” surrounding a central image, and seeing in this an allusion to the ancient Roman decorative style, rediscovered in the Renaissance, of symmetrical motifs on either side of a central image, Runyon uncovers an extensive network of symmetrical verbal echoes linking every chapter with another. Often two chapters of greatly different length and apparent importance (one on thumbs, for instance, balanced against one on the limits of human understanding) will in this way be brought together—not without, Runyon finds, an intended irony. The Essays emerge as even more self-reflexive than we thought, an amazingly intratextual work.
AUTHOR BIOGRAPHY
Randolph Paul Runyon is professor of French, Department of French and Italian, at Miami University, Oxford, Ohio.