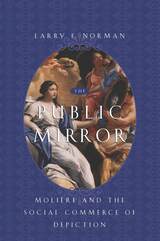 Though much beloved and widely produced, Molière's satirical comedies pose a problem for those reading or staging his works today: how can a genre associated with biting caricature and castigation deliver engaging theater? Instead of simply dismissing social satire as a foundation for Molière's theater, as many have done, Larry F. Norman takes seriously Molière's claim that his satires are first and foremost effective theater.

Pairing close readings of Molière's comedies with insightful accounts of French social history and aesthetics, Norman shows how Molière conceived of satire as a "public mirror" provoking dynamic exchange and conflict with audience members obsessed with their own images. Drawing on these tensions, Molière portrays characters satirizing one another on stage, with their reactions providing dramatic conflict and propelling comic dialogue. By laying bare his society's system of imagining itself, Molière's satires both enthralled and enraged his original audience and provide us with a crucial key to the classical culture of representation.
TABLE OF CONTENTS