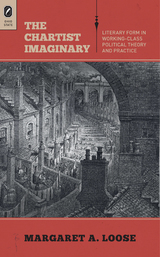 Can imaginative literature change the political and social history of a class or nation? In The Chartist Imaginary: Literary Form in Working-Class Political Theory and Practice, Margaret Loose turns to the Chartist Movement—Britain’s first mass working-class movement, dating from the 1830s to the 1840s—and argues that, based on literature by members of the movement, the answer to that question is a resounding “yes.” Chartist writing awakened workers’ awareness of discord between professed ideals and reality; exercised their conceptual powers (literary and social); and sharpened their appetite for more knowledge, intellectual power, dignity, and agency in the present to fashion a utopian future. Igniting such self-respecting, politically transfigurative energy was a unique kind of agency Loose calls “the Chartist imaginary.” In examining the Chartist movement, Loose balances the nervous projections of canonical Victorian writers against a consideration of the ways that laborers represented Chartism’s aims and tactics.

The Chartist Imaginary offers close readings of poems and fiction by Chartist figures from Ernest Jones and Thomas Cooper to W. J. Linton, Thomas Martin Wheeler, and Gerald Massey. It also draws on extensive archival research to examine, for the first time, working-class female Chartist poets Mary Hutton, E. L. E., and Elizabeth La Mont. Focusing on the literary form of these works, Loose strongly argues for the political power of the aesthetic in working-class literature.

AUTHOR BIOGRAPHY
Margaret A. Loose is associate professor of British Literature at the University of California, San Diego.