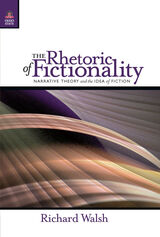 Narrative theory has always been centrally concerned with fiction, yet it has tended to treat fictions as if they were merely the framed or disowned equivalents of nonfictional narratives. A rhetorical perspective upon fictionality, however, sees it as a direct way of meaning and a distinct kind of communicative gesture. The Rhetoric of Fictionality: Narrative Theory and the Idea of Fiction by Richard Walsh argues the merit of such a perspective and demonstrates its radical implications for narrative theory.
A new conception of fictionality as a distinctive rhetorical resource, somewhat like the master-trope of fictional narrative, cuts across many of the core theoretical issues in the field. The model, set out in chapter one, is subsequently tested and elaborated in relation to currently prevalent assumptions about narrativity and mimesis; narrative structure; the narrator and transmission; voice and mediacy; narrative media and cognition; and creativity, reception, and involvement. Throughout, the theoretical analysis seeks to vindicate readers’ intuitions about fiction without merely restating them: the result is a forceful challenge to many of narrative theory’s orthodoxies.
The rhetorical model of fictionality advanced in this book offers up new areas of inquiry into the purchase of fictiveness itself upon questions of narrative interpretation. It urges a fundamental reconception of the apparatus of narrative theory by theorizing the conditions of significance that make fictions conceivable and worthwhile.
AUTHOR BIOGRAPHY
Richard Walsh is senior lecturer in the Department of English and Related Literature at the University of York in the United Kingdom.
REVIEWS
“Richard Walsh is a skeptic and iconoclast, and the objects of his skepticism and iconoclasm include some of narrative theory’s key concepts. Brilliant in nearly every detail, The Rhetoric of Fictionality is valuable as much for its negative critique as for its constructive contribution. It seems likely to become one of the most influential books on narrative theory ever published.”
—Brian McHale, author of The Obligation toward the Difficult Whole: Postmodernist Long Poems