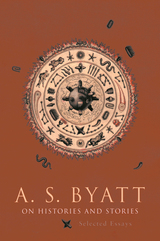 As writers of English from Australia to India to Sri Lanka command our attention, Salman Rushdie can state confidently that English fiction was moribund until the Empire wrote back, and few, even among the British, demur. A. S. Byatt does, and her case is persuasive. In a series of essays on the complicated relations between reading, writing, and remembering, the gifted novelist and critic sorts the modish from the merely interesting and the truly good to arrive at a new view of British writing in our time.

Whether writing about the renaissance of the historical novel, discussing her own translation of historical fact into fiction, or exploring the recent European revival of interest in myth, folklore, and fairytale, Byatt's abiding concern here is with the interplay of fiction and history. Her essays amount to an eloquent and often moving meditation on the commitment to historical narrative and storytelling that she shares with many of her British and European contemporaries. With copious illustration and abundant insights into writers from Elizabeth Bowen and Henry Green to Anthony Burgess, William Golding, Muriel Spark, Penelope Fitzgerald, Julian Barnes, Martin Amis, Hilary Mantel, and Pat Barker, On Histories and Stories is an oblique defense of the art Byatt practices and a map of the complex affiliations of British and European narrative since 1945.

REVIEWS
On Histories and Stories…offer[s] the most spirited and knowledgeable discussion of fiction’s basic questions that I have read for some time. These questions—the kind that surrounded the creation of the French nouveau roman, and were reawakened a decade or so later by the magic realists of Latin America—are rarely raised in the United States, where discussions of how literature represents reality have been smothered beneath the arid fuss of politicized deconstruction… Byatt is a vigorous exponent of the view that there is nothing wrong with making books out of books—with admitting that the impulse to write stems from enthusiastic reading, and that literary adventure takes place in a mental world generated from existent texts. Her own recent works of fiction are furiously bookish, and her Ellmann lectures propose a look at ‘the sudden flowering of the historical novel in Britain’… Her scope of reference and the number of her plot summaries show a gluttonous appetite for reading… She responds to ‘a general European interest in storytelling, and in thinking about storytelling’… Byatt is a writer actively searching for sources of energy outside the comfort zone of British social fiction… [Readers must] be grateful to have the art of fiction reworked in such knowing hands, by one to whom the pleasures and rewards of reading are so fundamental.
-- John Updike New Yorker


Byatt defines and claims ‘good reading’ as her territory with elegance, economy and precision. And with a great deal more quotation from the writers she wants us to read closely than is usually the case these days… She, quite rightly, uses long quotations ‘like the slides in an art historical lecture’ because they are ‘the Thing itself’ that’s crushed these days as literary theory has become a power game in which Derrida, Foucault and their followers ‘make writers fit into the boxes and nets of theoretical quotations which, a writer must feel, excite most of them at present much more than literature does.’ Byatt is genuinely excited by ‘the Thing itself’—the historical narratives and storytelling—that she has found full of life and flourishing in Britain and Europe throughout the twentieth century in a body of works to which she has added her own contribution… Byatt’s account of her ‘search for impossible precision’ in the writing of historical fiction is both an inspired and entertaining post-mortem on her own still-living and startled literary self, and a declaration of artistic and intellectual integrity against the historical relativism practiced by ideologues and propagandists of all persuasions these days… Byatt’s arguments on behalf of forms of writing I’ve frequently disdained and writers I’ve entirely overlooked is sending my reading off in good new directions. That’s her aim and she makes her points wonderfully well.
-- T. F. Rigelhof Globe and Mail


On Histories and Stories is offered as a defense, more or less, of British and European writing since World War II against claims of a loss of vitality made by post-colonialist scholars and writers, prominently Salman Rushdie. The book also defends the historical novel against the conventional charge of being either costume drama, bodice-ripper or escapism of another kind. Mrs. Byatt’s definition of ‘historical’ is far broader than that, extending, for instance, to a novel like Martin Amis’ Time’s Arrow which had for its protagonist a former Nazi officer whose life got replayed backwards. Third, Mrs. Byatt writes in defense of teaching literature—not ‘creative writing,’ she doesn’t do that—by emphasizing good reading in the manner of the New Critic I. A. Richards, that is, avoidance of stock responses and sticking to the text themselves. She also believes in extensive use of quotation in the manner of F. R. Leavis in his day—this rather than quoting from Jacques Derrida and others who, while doing exhilarating work, have led to ‘modern scholarship’s increasing use of the techniques and attitudes of art.’ Criticism, in her view, should be written in readily accessible language.
-- Colin Walters Washington Times


The A.S. Byatt of On Histories and Stories, a collection that derives, in part, from lectures she gave at Emory and Yale universities, is a generous writer. She is generous to the writers she sees as her literary ancestors and colleagues, and she is unusually generous to her readers, whom she invites to step behind the curtain to observe the set-building and scene-painting, the research and rehearsal that precede the enactment of her own fictions.
-- Michael Frank Los Angeles Times Book Review


Each essay [in this collection] exhaustively examines either the process of storytelling, or the thematic relationships between texts Byatt favors or considers a part of the canon. And what composes the canon, Byatt argues in her introduction, should in fact be less politicized than it has become… Byatt does not deny how deeply politics are embedded in literary production but regrets the subsumation of a writer’s art into its social politics… It is certain that the essays in this collection, broad ranging and appreciative as they are of a variety of writings and writers, fulfill her description for what criticism should be.
-- Jacqueline L. McGrath PIF Magazine


Byatt is at her best…the tone throughout these pieces remains consistent: eager, polite, informed, rushed. Not the least of the pleasures provided is that of having a respected writer reel off the names of some books she quite fancies.
-- Kirkus Reviews


In these seven essays, the British novelist Byatt examines many themes: the historical novel as created by twentieth-century English writers, the relations between scholarship and the creation of fiction, the modern European novel and its debt to mythology, and how fairy tales have influenced her and other modern authors… Plot summaries and extensive quotations from the selected texts will give readers an appetite to read the many novels discussed in these pieces.
-- Library Journal