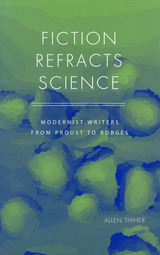 In Fiction Refracts Science, Allen Thiher demonstrates that major modernists, in their concern with the sciences, were strongly influenced by them. He argues that there are direct relations between science and the formal shape of fiction developed by some of the most important modernists. Especially relevant for his arguments are modern cosmology and quantum mechanics, as well as examples from mathematics, biology, and medicine.
Thiher begins his study by examining the question about the two cultures—scientific and humanistic—that is often invoked in discussions of their relationship. He outlines the essential context for understanding how science was perceived by modernist novelists. This background included Pascalian and Newtonian cosmology, Darwinism, and the questions of epistemology ushered in by relativity theory and quantum mechanics. He then devotes a chapter each to Musil, Proust, Kafka, and Joyce in which he focuses on epistemology and on ideas about law in science and literature.
Thiher goes on to describe the subsequent development of modernist fiction. He proposes that, after Joyce, thought experiments dominated the relations between science and later modernist fiction, as exemplified by Woolf, Faulkner, and Borges. In conclusion Thiher addresses the ongoing development of these experiments in postmodern fiction and discusses the fortunes of positivism in postmodern fiction.
Written in a clear and accessible style, Fiction Refracts Science will be of interest to specialists in literary modernism, science studies, and the history of science, as well as to scientists themselves.
AUTHOR BIOGRAPHY
Allen Thiher is Curators’ Professor of Romance Languages and Literature at the University of Missouri–Columbia. He is the author of numerous books, most recently Fiction Rivals Science: The French Novel from Balzac to Proust (University of Missouri Press).
TABLE OF CONTENTS