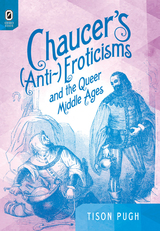 Using queer theory to untangle all types of nonnormative sexual identities, Tison Pugh uses Chaucer’s work to expose the ongoing tension in the Middle Ages between an erotic culture that glorified love as an ennobling passion and an anti-erotic religious and philosophical tradition that denigrated love and (perhaps especially) its enactments. Chaucer’s (Anti-)Eroticisms and the Queer Middle Ages considers the many ways in which anti-eroticisms complicate the conventional image of Chaucer. With chapters addressing such topics as mutual masochism, homosocial brotherhood, necrotic erotics, queer families, and the eroticisms of Chaucer’s God, Chaucer’s (Anti-)Eroticisms will forever change the way readers see the Canterbury Tales and Chaucer’s other masterpieces.

For Chaucer, erotic pursuits establish the thrust and tenor of many of his narratives, as they also expose the frustrations inherent in pursuing desires frowned upon by the religious foundations of Western medieval culture. One cannot love freely within an ideological framework that polices sexuality and privileges the anti-erotic Christian ideals of virginity and chastity, yet loving queerly creates escapes from social structures inimical to amour and its expressions in the medieval period. Thus Chaucer is not just England’s foundational love poet, he is also England’s foundational queer poet.
AUTHOR BIOGRAPHY
Tison Pugh is professor of English at University of Central Florida.