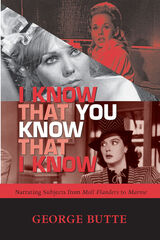 In I Know That You Know That I Know, Butte explores how stories narrate human consciousness. Butte locates a historical shift in the representation of webs of consciousnesses in narrative—what he calls “deep intersubjectivity”—and examines the effect this shift has since had on Western literature and culture. The author studies narrative practices in two ways: one pairing eighteenth-and nineteenth-century British novels (Moll Flanders and Great Expectations, for example), and the other studying genre practices—comedy, anti-comedy and masquerade—in written and film narratives (Jane Austen and His Girl Friday, for example, and Hitchcock’s Cary Grant films).

Butte’s second major claim argues for new ways to read representations of human consciousness, whether or not they take the form of deep intersubjectivity. Phenomenological criticism has lost its credibility in recent years, but this book identifies better reading strategies arising out of what the author calls poststructuralist phenomenology, grounded largely in the work of the French philosopher Merleau-Ponty. Butte criticizes the extreme of transcendental idealism (first-wave phenomenological criticism) and cultural materialism (when it rules out the study of consciousness). He also criticizes the dominant Lacanian framework of much academic film criticism.