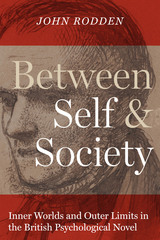 Between Self and Society explores the psychosocial dramas that galvanize six major British novels written between the eighteenth and twentieth centuries. The book challenges an influential misconception that has for too long hindered appreciation of the psychological novel. John Rodden argues that there should be no simplifying antithesis between psychological, “inner” conflicts (within the mind or “soul”) and institutional, “outer” conflicts (within family, class, community). Instead, it is the overarching, dramatic—yet often tortuous—relations between self and society that demand our attention. Rodden presents fresh interpretations of an eclectic group of prose fiction classics, including Tobias Smollett’s The Adventures of Roderick Random, William Godwin’s Caleb Williams, Thomas Hardy’s The Mayor of Casterbridge, Ford Madox Ford’s The Good Soldier, Wyndham Lewis’s Tarr, and D. H. Lawrence’s Women in Love.

Far from being merely admirable experiments, let alone daring though interesting failures, these fictions are shown to possess aesthetic unity, stylistic consistency, and psychic force. Between Self and Society thus impels our careful reconsideration of novels that represent major artistic achievements, yet have been either unjustly neglected or appreciated in limiting ways that do injustice to their psychological aspects. Rodden’s vibrant discussion invites an upward revaluation of these works and encourages the full recognition of their value and significance in British literary history.

John Rodden has taught at the University of Virginia and the University of Texas at Austin. He is the author or editor of The Unexamined Orwell; Every Intellectual’s Big Brother: George Orwell’s Literary Siblings; The Politics of Literary Reputation: The Making and Claiming of St. George Orwell; Scenes from an Afterlife: The Legacy of George Orwell; Understanding Animal Farm in Historical Context; and George Orwell: Into the Twenty-First Century, among other books.

Chapter One. Smollett's Roderick Random: In Love with Narcissa

Chapter Four. Ford's The Good Soldier: Movements of the Heart

Chapter Six. Lawrence'sWomen in Love: The Role of Miss "Dawington"