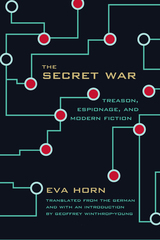 The Secret War marks a new direction in the cultural history and theory of intelligence gathering and state secrecy in the twentieth and early twenty-first centuries. While historical truth remains hidden from the public, Eva Horn finds in political fiction, which serves as both an indicator and a tool, a means to analyze political secrets. Starting with a general theory of treason and military intelligence as a specific type of political knowledge, the book charts the history of intelligence gathering from 1900 to 9/11. The Secret War analyzes literary and cinematic depictions of espionage from Rudyard Kipling and T. E. Lawrence to John Le Carré and Steven Spielberg. Horn considers these fictional accounts against the historical development of Western secret services from their inception in World War I to their struggle against current terrorist networks. The Secret War shows the crucial part fictions play in shaping conflicts, constructing “the enemy,” and deciding political strategies.

Geoffrey Winthrop-Young is a professor of German at the University of British Columbia in Vancouver, Canada.