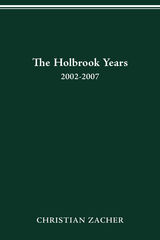 The OSU Board of Trustees and its presidential search committee found in Holbrook’s experience many reasons to invite her to lead Ohio’s flagship institution of higher education. Foremost among them was her familiarity with academic medicine, which they thought would give her a special understanding of OSU’s growing medical center. She was particularly interested in fostering multi-disciplinary programs and emphasizing outreach via pre-collegiate programs to broaden the pipeline for students who saw The Ohio State University as a goal.

AUTHOR BIOGRAPHY
Christian Zacher has held a number of administrative positions at Ohio State including the director of the Center for Medieval and Renaissance Studies, associate dean of humanities, chair of comparative studies and secretary of the university senate. Zacher is now professor emeritus and lives in Columbus.
TABLE OF CONTENTS
Contents
Foreword
1. The New President
2. Students
3. The Faculty
4. Research
5. A More Diverse Campus
6. Reaching Out
7. Departure and Confluence
Appendix
About the Author
Index