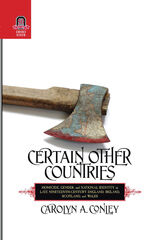 Even though England, Ireland, Scotland, and Wales were under a common Parliament in the nineteenth century, cultural, economic, and historical differences led to very different values and assumptions about crime and punishment. For example, though the Scots were the most likely to convict accused killers, English, Welsh, and Irish killers were two and a half times more likely to be executed for their crimes. In Certain Other Countries, Carolyn A. Conley explores how the concepts of national identity and criminal violence influenced each other in the Victorian-era United Kingdom. It also addresses the differences among the nations as well as the ways that homicide trials illuminate the issues of gender, ethnicity, family, privacy, property, and class. Homicides reflect assumptions about the proper balance of power in various relationships. For example, Englishmen were ten times more likely to kill women they were courting than were men in the Celtic nations.

By combining quantitative techniques in the analysis of over seven thousand cases, as well as careful and detailed readings of individual cases, the book exposes trends and patterns that might not have been evident in works using only one method. For instance, by examining all homicide trials rather than concentrating exclusively on a few highly celebrated ones, it becomes clear that most female killers were not viewed with particular horror, but were treated much like their male counterparts.

The conclusions offer challenges and correctives to existing scholarship on gender, ethnicity, class, and violence. The book also demonstrates that the Welsh, Scots, and English remained quite distinct long after their melding as Britons was announced and celebrated. By blending a study of trends in violent behavior with ideas about national identity, Conley brings together rich and hotly debated fields of modern history. This book will be valuable both for scholars of crime and violence as well as for those studying British history.
AUTHOR BIOGRAPHY
Carolyn A. Conley is professor of history at the University of Alabama at Birmingham.
REVIEWS
“Certain Other Countries has been thoroughly researched primarily in the English, Irish, Scots, and Welsh press. The scholarship is sound and the arguments persuasive. It adds new and important dimensions to our knowledge of homicide and identity within the nineteenth-century British Isles. It adds equally to our understanding of the different attitudes expressed in different courts.” —Clive Emsley, The Open University