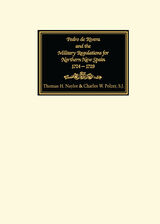 Philip V ordered an inspection of the presidios in the northern provinces which resulted in the reglamento of 1729. The study was capably done and documented by Pedro de Rivera Villalon. Includes Rivera’s report to the Viceroy of New Spain, the Reglamento of Havana , the inspection, Alvarez Barreiro’s map and descriptions. The documents are presented in their original Spanish and in translation, provide a detailed background by which modern scholars can better assess the status and role of Spain's military outposts
AUTHOR BIOGRAPHY
The late Thomas H. Naylor was an editor for the Documentary Relations of the Southwest project. Charles W. Polzer, curator of ethnohistory, is the director of the Documentary Relations of the Southwest project at the Arizona State Museum.
REVIEWS
"The reader gets a fine sense of not only military procedures but also what life must have been like for a soldier in the borderlands."—Pacific Historical Review