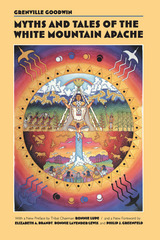 Myths and Tales of the White Mountain Apache
by Grenville Goodwin and Philip J. Greenfeld
preface by Ronnie Lupe
foreword by Elizabeth A. Brandt and Bonnie Lavender-Lewis

“This volume contains translations of Apache stories that reflect our distinct view of the world and our approach to life. These myths and fables have survived through untold generations because the truth contained in them is eternal and the moral lessons that they teach are still valid. . . . You can read these stories and catch a glimpse of how our ancestors observed nature, drew metaphors from everyday observations and happenings, and applied the lessons learned to everyday life. Read them and you will see how harmony with nature and the natural world is the goal of every Apache.” —Ronnie Lupe, Tribal Chairman, White Mountain Apache Tribe

These fifty-seven tales (with seven variants) gathered between 1931 and 1936 include major cycles dealing with Creation and Coyote, minor tales, and additional stories derived from Spanish and Mexican tradition. The tales are of two classes: holy tales said by some to explain the origin of ceremonies and holy powers, and tales which have to do with the creation of the earth, the emergence, the flood, the slaying of monsters, and the origin of customs. As Grenville Goodwin was the first anthropologist to work with the White Mountain Apache, his insights remain a primary source on this people.
AUTHOR BIOGRAPHY
Grenville Goodwin’s authorship in the late 1930s of The Social Organization of the Western Apache made him a major figure in North American ethnology by only scratched the surface of his profound knowledge of the Apache. A New Yorker by birth, Goodwin’s understanding of Apache ways came not from schooling but from living over a period of eight years with the Apaches on the San Carlos Reservation. The keenness of his perceptions and his empathy with his subjects made him an authority and friend respected by both Apache tribal members and leading anthropologists the world over. In 1940, death interrupted Goodwin’s plan to write a series of additional monographs on other aspects of Western Apache life.
TABLE OF CONTENTS
Contents
Preface to the New Edition by Ronnie Lupe
Foreword, by Elizabeth A. Brandt, Bonnie Lavender-Lewis, and Philip K. Greenfeld
A Note on Written Apache, by Elizabeth A. Brandt and Philip J. Greenfeld
Preface
Chapter 1. The Earth is set up
Variant
Chapter 2. He goes to his father: Slaying of monsters
Chapter 3. Obtaining bow and arrows
Chapter 4. He goes to his father: Obtaining bow and arrows: Vulva Woman: Slaying of monsters: How Gila Monster got his name: Turtle saves his comrade: na•ye'nezyane wins his wife back: na•ye'nezyane obtains horses
Variant (Vulva Woman)
Chapter 5. They kill girls asleep
Chapter 6. The emergence
Chapter 7. The flood: Turkey makes the corn: How Coyote showed the way to make a living
Chapter 8. Turkey makes the corn: Coyote plants cooked corn
Chapter 9. Lost with Turkey
Chapter 10. Turkey teaches farming
Chapter 11. How the squash plant was obtained
Chapter 12. He who became an antelope
Chapter 13. He fell down on Bear
Chapter 14. The talking horse
Chapter 15. He releases the deer
Chapter 16. She who became a deer
Chapter 17. A ga•n becomes Raven Old Man's son-in-law
Chapter 18. The ga•n people move away
Chapter 19. The ga•n becomes Raven Old Man's son-in-law; The ga•n disappear from tse-gots'uk
Chapter 20. The maiden from whom they disappeared into the water: Inside Elk's belly
Chapter 21. The man who became a ga•n
Chapter 22. Making a chief: Sun and Thunder: Sun and Darkness
Chapter 23. Road Runner Youth makes Mulberry Man
Chapter 24. The man who pursued mountain sheep
Chapter 25. Wolf and Mountain Lion hunt together: White-tailed Deer and Mescal talk together: Sack and Pot talk together
Variant 2: (When everything talked: White-tailed Deer and Mescal talk together)
Chapter 26. Grasshopper loses his leg: How Gila Monster got his name
Chapter 27. Captured
Variant
Chapter 28. The old woman and baby who were abandoned
Chapter 29. The abandoned children
Chapter 30. Her brother becomes her husband
Chapter 32. Origin of curing ceremonies
Chapter 33. Coyote steals Abert Squirrel's fire
Chapter 34. The winning of dawn
Variant
Chapter 35. Coyote steal Sun's tobacco
Chapter 36. Coyote's daughter (becomes) his wife
Chapter 37. Coyote kills his children
Chapter 38. The berdache Coyote story
Chapter 39. The Jack Rabbit girls toss their eyes up
Chapter 40. Coyote hunts with Bobcat
Chapter 41. Badger carries darkness: Coyote and Bobcat scratch each other
Chapter 42. Coyote and Bobcat trick each other: Coyote carries off Beaver
Chapter 43. Coyote trots along
Chapter 44. Coyote races with Frog
Chapter 45. Coyote and Bear cripple and cure each other
Chapter 47. How deer horns became hard
Chapter 48. Coyote brings in Big Owl's cap: How deer horns became hard: The Bear Woman: Coyote determines death
Chapter 49. Big Owl chops off his penis
Chapter 50. Two hills in line
Chapter 51. Big Owl hunts "Rats": People turn themselves to Ground Heat: Big Owl eats his own children: Big Owl and Turkey meet each other
Chapter 52. Coyote steals wheat: Coyote's faeces under his hat
Variant (Gray Fox steals wheat)
Chapter 53. Coyote herds sheep for a white man
Chapter 54. The two thieves
Chapter 55. The good and the bad brothers
Chapter 56. The magic ring
Chapter 57. Magic flight