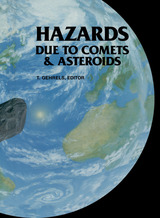 Hazards Due to Comets and Asteroids
edited by Tom Gehrels
University of Arizona Press, 1994
Cloth: 978-0-8165-1505-9
In 1993, the U.S. Department of Defense declassified information dealing with frequent explosions in the upper atmosphere caused by meteoric impact. It is estimated that impacts have occurred of a magnitude equivalent to the atomic bomb detonated at Hiroshima. Not all such space voyagers meet their end in the atmosphere, however; huge craters attest to the bombardment of earth over millions of years, and a major impact may have resulted in the extinction of dinosaurs. An impact in Siberia near the beginning of this century proves that such events are not confined to geologic time. Hazards Due to Comets and Asteroids marks a significant step in the attempt to come to grips with the threats posed by such phenomena. It brings together more than one hundred scientists from around the world, who draw on observational and theoretical research to focus on the technical problems related to all aspects of dealing with these hazards: searching for and identifying hazardous comets and asteroids; describing their statistics and characteristics; intercepting and altering the orbits of dangerous objects; and applying existent technologies—rocket boosters, rendezvous and soft-landing techniques, instrumentation—to such missions. The book considers defensive options for diverting or disrupting an approaching body, including solar sails, kinetic-energy impacts, nuclear explosives, robotic mass drivers, and various propulsion systems. A cataclysmic impact posing a threat to life on Earth is a possibility that tomorrow's technology is capable of averting. This book examines in depth the reality of the threat and proposes practical measures that can be initiated now should we ever need to deal with it.