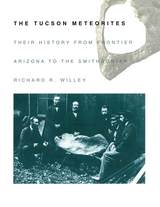 The Tucson Meteorites: Their History from Frontier Arizona to the Smithsonian
by Richard R. Willey
University of Arizona Press, 1997
Paper: 978-0-8165-1816-6
The Tucson Meteorites—the two known fragments totaling more that a ton of primordial space matter—were discovered during the first half of the nineteenth century on the desolate Mexican frontier that later became Arizona. In this book, Richard R. Willey recounts the bizarre history of these meteorites and explores the mystery, unresolved to the present day, of where they fell to earth and whether more fragments remain to be found in the mountains of southern Arizona.

Willey tracks the meteorites through years of confiscation and disputed ownership to the Smithsonian Institution. "I had seen passing allusions to the Meteorite in occasional writings on Tucson’s colorful history," he recalls, "but little that hinted at the social, political, and military involvement that the Meteorite had enjoyed in the Southwest of yesteryear, nor of the mystery surrounding other, yet unfound ‘enormous masses’ of the Meteorite." The book features both historical illustrations and photographs of the meteorite fragments and also includes data on their physical characteristics. Willey’s story will leave readers with an enhanced appreciation of life on the early Arizona frontier and of the facts surrounding the fate of the Tucson Meteorites in that frontier setting.