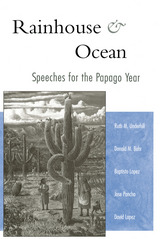 The Tohono O'odham of southern Arizona, formerly known as the Papago, have made a life in a place that many would consider uninhabitable. These desert people were converted to Catholicism by early Spanish missionaries, yet they retain much of their earlier lifeway as a means of continuing adaptation to their desert environment.

This book is a restudy of speeches and ritual information collected by anthropologist Underhill beginning in 1931 and published in her book Papago Indian Religion (1946). It describes the Native—as opposed to the Christian—side of the yearly ritual cycle of the Tohono O'odham, showing how seven rites form a system of meanings that grew from the relation between these people and their desert homeland. The rites presented focus on the summer wine feast, salt pilgrimage, hunting, war, and flood.
AUTHOR BIOGRAPHY
Anthropologists Ruth M. Underhill and  Donald M. Bahr each studied the Tohono O'odham extensively. Baptisto Lopez, Jose Pancho, and David Lopez, Tohono O'odham men of the same village, helped make this book possible.
TABLE OF CONTENTS
Contents
Introduction
Rain
Ocean
Hunting
War
Flood
References Cited
Index