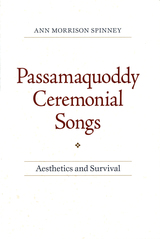 Based on extensive research across several disciplines, this book examines the songs and dances involved in public ceremonies of the Wabanaki Confederacy, a coalition of five Algonquian First Nations that figured importantly in the political history of New England and the Maritimes from the seventeenth century on. Ethnomusicologist Ann Morrison Spinney analyzes these ceremonial performances as they have been maintained in one of those nations, the Passamaquoddy community of Maine. She compares historical accounts with forms that have persisted to the present, showing how versions of the same songs, dances, and ritual speeches have continued to play a vital role in Passamaquoddy culture over time. A particular focus of the study is the annual Sipayik Indian Day, a public presentation of the dances associated with the protocols of the Wabanaki Confederacy. Spinney interprets these practices using melodic analysis and cultural contextual frameworks, drawing on a variety of sources, including written documents, sound and video recordings, interviews with singers, dancers, and other cultural practitioners, and her own fieldwork observations. Her research shows that Passamaquoddy techniques of song composition and performance parallel both the structure of the Passamaquoddy language and the political organizations that these ceremonies support.
AUTHOR BIOGRAPHY
Ann Morrison Spinney is assistant professor of music and Irish studies at Boston College.