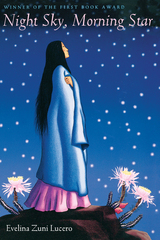 At the Indian artisans show in Santa Clara Pueblo, Cecelia Bluespruce sits with her wares in the middle of a row of booths—a good place to catch buyers. She is a successful Native American artist, a sculptor and potter of renown. But Cecelia is in the middle of something deeper than an art show, for she has become trapped by dreams and shadows of her past.

Night Sky, Morning Star is a story of remembrance and reconciliation in one Native American family separated by time and chance. Cecelia’s grown son, Jude, now wants to learn about the father he has never known. Political activist Julian Morning Star, imprisoned twenty years for a crime he did not commit, is unaware that his son even exists. Troubled by dreams, lies, and denial of the past, Cecelia is guided toward wholeness by family and friends who have their own pasts to confront.

This compelling novel plunges readers into the hubbub of the Indian arts market and into the grim reality of prison life. Evelina Zuni Lucero introduces us to experiences we may find unfamiliar: diverse Native American traditions, life on a BIA Indian agency compound, the making of an Indian activist. But she also reintroduces us to two things we all live for: the power of story and the power of love.

Night Sky, Morning Star is the fiction winner of the 1999 First Book Awards competition of the Native Writers’ Circle of the Americas.