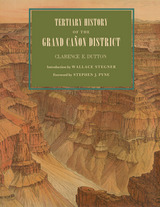 Originally published in 1882, Clarence Dutton’s Tertiary History of the Grand Cañon District has become one of the definitive books on the Grand Canyon. Commissioned as a study of the region’s geology and issued by the fledgling U.S. Geological Survey, it is as much admired today for its literary as its scientific merits. With its beautiful illustrations by Thomas Moran and William Henry Holmes, it is a seminal work on the Canyon that has never been surpassed for its eloquence and authority.

This new edition of Dutton’s magnum opus makes that work available once again. Visitors to the Canyon will gain a new appreciation of its majesty as Dutton takes readers on several excursions among its castellated and cathedral-like peaks and ridges. Along the way, he explains the peculiar characteristics of different rocks, the water-sculpturing process, volcanic cones and outflows, the extent of the river’s erosion, and other geological features.

Dutton’s Tertiary History remains arguably the most evocative and compelling geological writing ever done on the Grand Canyon region. As Stephen J. Pyne observes in his foreword, Dutton “recast a rocky peninsula into geo-poetry, reshaped an amorphous panorama of Time into narrative History, and transformed an American scene into a universal symbol.” No one who has thrilled to the majesty of the Grand Canyon will fail to be moved by this timeless work.

AUTHOR BIOGRAPHY
Clarence E. Dutton (1841–1912) was head of the division of volcanic geology for the U.S. Geological Survey and carried out geological investigations in the Grand Canyon and on the plateaus of Utah.
TABLE OF CONTENTS