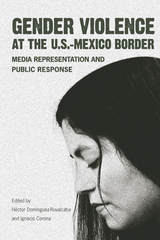 The U.S.-Mexico border is frequently presented by contemporary media as a violent and dangerous place. But that is not a new perception. For decades the border has been constructed as a topographic metaphor for all forms of illegality, in which an ineffable link between space and violence is somehow assumed. The sociological and cultural implications of violence have recently emerged at the forefront of academic discussions about the border. And yet few studies have been devoted to one of its most disturbing manifestations: gender violence. This book analyzes this pervasive phenomenon, including the femicides in Ciudad Juárez that have come to exemplify, at least for the media, its most extreme manifestation.
Contributors to this volume propose that the study of gender-motivated violence requires interpretive and analytical strategies that draw on methods reaching across the divide between the social sciences and the humanities. Through such an interdisciplinary conversation, the book examines how such violence is (re)presented in oral narratives, newspaper reports, films and documentaries, novels, TV series, and legal discourse. It also examines the role that the media have played in this process, as well as the legal initiatives that might address this pressing social problem.
Together these essays offer a new perspective on the implications of, and connections between, gendered forms of violence and topics such as mechanisms of social violence, the micro-social effects of economic models, the asymmetries of power in local, national, and transnational configurations, and the particular rhetoric, aesthetics, and ethics of discourses that represent violence.
AUTHOR BIOGRAPHY
Héctor Domínguez-Ruvalcaba is an associate professor in the Department of Spanish and Portuguese at the University of Texas at Austin. He is the author of Modernity and the Nation in Mexican Representations of Masculinity: From Sensuality to Bloodshed. Ignacio Corona is an associate professor of Literatures and Cultures of Latin America in the Department of Spanish and Portuguese at Ohio State University. He is co-editor of Postnational Musical Identities: Cultural Production, Distribution, and Consumption in a Globalized Scenario and The Contemporary Mexican Chronicle: Theoretical Perspectives on the Liminal Genre.
TABLE OF CONTENTS

Part I Oral Testimonies on Gender Violence
1 Violence and Transvestite/Transgender Sex Workers in Tijuana Debra A. Castillo, María Gudelia Rangel Gómez, and
Armando Rosas Solís
2 We Never Thought It Would Happen to Us: Approaches to the Study of the Subjectivities of the Mothers of the Murdered Women of Ciudad Juárez
Patricia Ravelo Blancas

Part IV The Legal Status of Femicides
7 ¡Alto a la Impunidad! Is There Legal Relief for the Murders of Women in Ciudad Juárez?
James C. Harrington
References
About the Contributors
Index