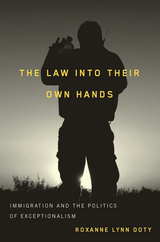 Border security and illegal immigration along the U.S.–Mexico border are hotly debated issues in contemporary society. The emergence of civilian vigilante groups, such as the Minutemen, at the border is the most recent social phenomenon to contribute new controversy to the discussion. The Law Into Their Own Hands looks at the contemporary nativist, anti-immigrant movement in the United States today.

Doty examines the social and political contexts that have enabled these civilian groups to flourish and gain legitimacy amongst policy makers and the public. The sentiments underlying the vigilante movement both draw upon and are channeled through a diverse range of organizations whose messages are often reinforced by the media. Taking action when they believe official policy is lacking, groups ranging from elements of the religious right to anti-immigrant groups to white supremacists have created a social movement.

Doty seeks to alert us to the consequences related to this growing movement and to the restructuring of our society. She maintains that with immigrants being considered as enemies and denied basic human rights, it is irresponsible of both citizens and policy makers to treat this complicated issue as a simple black or white reality.

In this solid and theoretically grounded look at contemporary, post-9/11 border vigilantism, the author observes the dangerous and unproductive manner in which private citizens seek to draw firm and uncompromising lines between who is worthy of inclusion in our society and who is not.
AUTHOR BIOGRAPHY
Roxanne Lynn Doty is an associate professor in the Department of Political Science at Arizona State University. She is the author of two other books, Imperial Encounters: The Politics of Representation in North-South Relations, and Anti-Immigrantism in Western Democracies: Statecraft, Desire and the Politics of Exclusion.
TABLE OF CONTENTS


Acknowledgments
1 Fear and Loathing on the U.S.-Mexico Border
2 ‘‘I’m Proud to be a Vigilante. How About You?’’
3 ‘‘It’s Your Country, Take it Back.’’
4 Spreading the Message
5 Attrition Through Enforcement: Constructing Enemies in the Contemporary Immigration ‘‘Crisis’’
Notes
Bibliography
Index