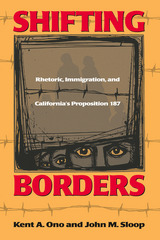 "Like articles representing the positions of proponents of the measure, those representing opponents constructing the nation as potentially in danger as a result of undocumented immigration."

How do we learn to recognize the damning effects of good rhetorical intentions? And where will we find arguments which escape this trap that permeates the liberal social policy world? Shifting Borders uses an evaluation of the debate over California Proposition 187 to demonstrate how this quandary is best understood by close interrogation of mainstream reports and debates and by bringing to the fore voices that are often left out of mediated discussions.

It is these voices outside the mainstream, so-called "outlaw" discourses, that hold the best possibilities for real social change. To illustrate their claim, the authors present dominant and outlaw discourses around Proposition 187, from television reports, internet chat sites, and religious discourse to coverage of the Los Angeles Times. Their critique ably demonstrates how difficult it is to maintain a position outside the mainstream, but also how important it is for the press, citizens and scholars to actively search out such voices. The findings are organized through a model that provides an innovative method for understanding events and arguments through their rhetorical and communicative construction. In a world where the mediated word defines so much of what we know, Shifting Borders provides a lucid introduction to analyzing the spoken and written word that constitutes political debate in contemporary U.S. culture. In doing so, it makes an important contribution to any future development of progressive political strategy.

postamble();
AUTHOR BIOGRAPHY
Kent A. Ono is an Associate Professor in the American Studies and Asian American Studies programs at the University of California, Davis. He is the co-editor of Enterprise Zones: Critical Positions on Star Trek.

John M. Sloop is an Associate Professor of Communication Studies at Vanderbilt University. He is the author of The Cultural Prison, co-editor of Judgment Calls and Mapping the Beat.
TABLE OF CONTENTS