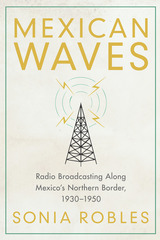 Mexican Waves is the fascinating history of how borderlands radio stations shaped the identity of an entire region as they addressed the needs of the local population and fluidly reached across borders to the United States. In so doing, radio stations created a new market of borderlands consumers and worked both within and outside the constraints of Mexican and U.S. laws.

Historian Sonia Robles examines the transnational business practices of Mexican radio entrepreneurs between the Golden Age of radio and the early years of television history. Intersecting Mexican history and diaspora studies with communications studies, this book explains how Mexican radio entrepreneurs targeted the Mexican population in the United States decades before U.S. advertising agencies realized the value of the Spanish-language market.

Robles’s robust transnational research weaves together histories of technology, performance, entrepreneurship, and business into a single story. Examining the programming of northern Mexican commercial radio stations, the book shows how radio stations from Tijuana to Matamoros courted Spanish-language listeners in the U.S. Southwest and local Mexican audiences between 1930 and 1950. Robles deftly demonstrates Mexico’s role in creating the borderlands, adding texture and depth to the story.

Scholars and students of radio, Spanish-language media in the United States, communication studies, Mexican history, and border studies will see how Mexican radio shaped the region’s development and how transnational listening communities used broadcast media’s unique programming to carve out a place for themselves as consumers and citizens of Mexico and the United States.
AUTHOR BIOGRAPHY
Sonia Robles received her PhD in history from Michigan State University and is an assistant professor at the Universidad Panamericana in Mexico City.
TABLE OF CONTENTS

Introduction
1. Cross-Border Dreams: Radio Entrepreneurs and Their International Audience
2. Luring Listeners: Creativity and Ingenuity on the Spectrum
3. Interventores and the State: Exerting Control in a Changing Place
4. Singing on Both Sides of the Line: Radio as a Musical and Cultural Platform
5. Crafting Consumers: Spanish and English Commercials on Mexican Radio
Conclusion. Postwar Broadcasting: Partnerships and Prototypes