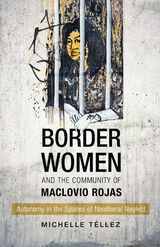 Near Tijuana, Baja California, the autonomous community of Maclovio Rojas demonstrates what is possible for urban place-based political movements. More than a community, Maclovio Rojas is a women-led social movement that works for economic and political autonomy to address issues of health, education, housing, nutrition, and security.

Border Women and the Community of Maclovio Rojas tells the story of the community’s struggle to carve out space for survival and thriving in the shadows of the U.S.-Mexico geopolitical border. This ethnography by Michelle Téllez demonstrates the state’s neglect in providing social services and local infrastructure. This neglect exacerbates the structural violence endemic to the border region—a continuation of colonial systems of power on the urban, rural, and racialized poor. Téllez shows that in creating the community of Maclovio Rojas, residents have challenged prescriptive notions of nation and belonging. Through women’s active participation and leadership, a women’s political subjectivity has emerged—Maclovianas. These border women both contest and invoke their citizenship as they struggle to have their land rights recognized, and they transform traditional political roles into that of agency and responsibility.

This book highlights the U.S.-Mexico borderlands as a space of resistance, conviviality, agency, and creative community building where transformative politics can take place. It shows hope, struggle, and possibility in the context of gendered violences of racial capitalism on the Mexican side of the U.S.-Mexico border.