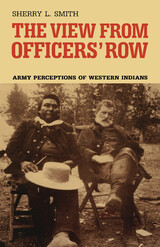 Capturing military men in contemplation rather than combat, Sherry L. Smith reveals American army officers' views about the Indians against whom they fought in the last half of the nineteenth century. She demonstrates that these officers—and their wives—did not share a monolithic, negative view of their enemies, but instead often developed a great respect for Indians and their cultures. Some officers even came to question Indian policy, expressed misgivings about their personal involvement in the Indian Wars, and openly sympathized with their foe.

The book reviews the period 1848–1890—from the acquisition of the Mexican Cession to the Battle of Wounded Knee—and encompasses the entire trans-Mississippi West. Resting primarily on personal documents drawn from a representative sample of the officer corps at all levels, the study seeks to juxtapose the opinions of high-ranking officers with those of officers of lesser prominence, who were perhaps less inclined to express personal opinions in official reports.

No educated segment of American society had more prolonged contact with Indians than did army officers and their wives, yet not until now has such an overview of their attitudes been presented. Smith's work demolishes the stereotype of the Indian-hating officer and broadens our understanding of the role of the army in the American West.
TABLE OF CONTENTS