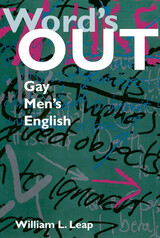 Conversation between two men, a salesclerk (S) and a customer (C).

S: Can I help you find something?

C: No thanks, I am just looking. [Pause while customer looks at merchandise]

C: What are you asking for these? [Points to set of grey sweatshirts]

S: Oh. I'm afraid they're not on sale today. But that colored shirt would look nice on you. [Points to a pile of lavender sweatshirts, which are on sale]

C: Thanks for your help. [C walks off]

The first book-length analysis of the language used by gay men.

Do gay men communicate with each other differently than they do with straight people? If they do, how is "gay men's English" different from "straight English"? In Word's Out, William Leap addresses these questions in an entertaining account that looks at gay men's English as a cultural and a linguistic phenomenon.

Whereas previous studies of "gay language" have centered almost entirely on vocabulary, word history, and folklore, Word's Out focuses on the linguistic practices-cooperation, negotiation, and risk taking-that underlie gay men's conversations, storytelling, verbal dueling, self-description, and construction of outrageous references. Leap "reads" conversations for covert and overt signs of gay men's English, using anecdotes drawn from gay dinner parties, late-night airplane flights, restaurants, department stores, and gourmet shops, and from other all-gay and gay/straight settings. He incorporates material from life-story narratives and other interviews and discussions with gay men, from gay magazines, newspapers, and books, and from events in his own life.

Provocative and potentially controversial, Word's Out provides fascinating insight into the politics of gay experience by exploring the connections between language and daily experience in gay men's lives.

"Word's Out is the first comprehensive linguistic ethnography of the North American gay male speech community. Word's Out is a significant contribution to language and gender research in general and to lavender linguistics in particular." --American Speech

"The book is a superb example of gay studies at its best and as it should be. It deals with real people and uses theory only to clarify points, not to cloud issues or to display the author's cleverness." --Lambda Book Report

"This work explores important insights into the politics of gay experience." --The Reader's Review

"This book presents engaging analysis of a large number of instances of 'Gay English,' including banter at parties and gyms, poignant memories of trying to understand adolescent feelings of difference, several excerpts from fiction, a pair of 1980s popular songs, toilet graffiti, 1987 responses to two sex ads, interview responses, and some folk semantics." --Anthropological Linguistics

William L. Leap is professor of anthropology at American University in Washington, D.C. His recent articles on gay English have appeared in New York Folklore, High School Journal, and in his edited collection Beyond the Lavender Lexicon (1995).