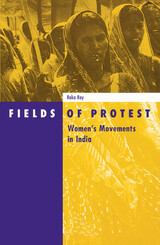 The women's movement in India has a long and rich history in which millions of ordinary women live, work, and struggle to survive in order to remake their family, home, and social lives. Whether fighting for safe contraception, literacy, water, and electricity or resisting sexual harassment, a vibrant and active women's movement is thriving in many parts of India today.

Fields of Protest explores the political and cultural circumstances under which groups of women organize to fight for their rights and self-worth. Starting with Bombay and Calcutta, Raka Ray discusses the creation of "political fields"--structured, unequal, and socially constructed political environments within which organizations exist, flourish, or fail. In other words, women's organizations are not autonomous or free agents; rather, they inherit a "field" and its accompanying social relations, and when they act, they act in response to it and within it. Drawing on the literature of both social movements and feminism, Ray analyzes the striking differences between the movements in these two cities.

Using an innovative and comparative perspective, Ray offers a unique look at Indian activist women and adds a new dimension to the study of women's movements on a global level.

"Raka Ray's very important and vividly-textured study of women's radical political activism in Bombay and Calcutta between the seventies and the nineties, breaks two of the strongest walls of silence: about Left-radical politics, and about women's self-organization and modes of struggle within as well as against the grain of Left discourses. Written with sparkle, lucidity and affection." Economic and Political Weekly

"Drawing on the literature describing social movements and feminism in India, Ray analyzes the differences between the causes that define women's struggles in Bombay and Calcutta and the differences in their style and strategy. She also traces the history of women's movements in India and provides a list of political parties and women's organizations in India." India Abroad

"This is one of the most important books about women's movements written in the past decade. An eminently readable book. A rich and compelling account of the vitality and complexity of the contemporary Indian women's movement." American Journal of Sociology

"This is a innovative comparative political analysis. Ray's use of personal life stories of activist women helps to create an interesting and lively discussion of local women's movements in a global context." Journal of Women's History

"Raka Ray's book is an end-of the-millennium gem in the treasure chest of literature on women's movement in India. Ray gives us an important book. Her historical details regarding the political realities in Bombay and Calcutta are as impressive as the exhaustiveness of her interview-based research. Ray's book offers stylistic and methodological insights that can attract the attention of an India novice as well as prove useful to a seasoned India researcher, interested in local-level politics and local women's movements." Gender and Society

"Fields of Protest is an important demonstration of how collective interests and identities are shaped within varying locations." Feminist Collections

"Raka Ray's skillful analysis provides an understanding of the regional variations in the issues and agendas of the women's movement through a comparison of women's organizations in two metropolitan cities." Feminist Studies

"Fields of Protest is a graceful, smart, careful study. Its central argument is clearly developed and well substantiated through reference to excellent interviews with activists in the two cities. Ray deftly moves back and forth between the local, regional, and national level, the stories of activists and debates among sociologists and women's studies scholars. What Ray does very successfully is to fulfill her promise of moving beyond the simple dichotomy between heroism and victimization to explore the nuanced, complicated ways in which women live, work, and struggle." Journal of Asian Studies

Raka Ray is an assistant professor in the Department of Sociology at the University of California, Berkeley.