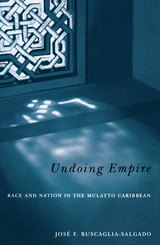 A revelatory account that places mulatto experience at the center of Caribbean history.

This ambitious book brings to light the story of what JosÃ© F. Buscaglia-Salgado terms mulataje-the ways Caribbean aesthetics offer the possibility of the ultimate erasure of racial difference. Undoing Empire gives a broad panorama stretching from the complex politics of medieval Iberian societies to the beginning of direct U.S. hegemony in the Caribbean at the end of the nineteenth century.

Buscaglia-Salgado begins with an examination of Washington Irving's "American Columbiad" as an act of historical and territorial plundering. He then traces the roots of mulatto society to the pre-1492 Iberian world, not only finding a connection between the Moors of "Old Spain" and the morenos-the blacks and mulattos of the New World-but also offering a profound critique of creole and imperial discourses. Buscaglia-Salgado reads the pursuit and contestation of what he terms the European Ideal in colonial texts, architecture, and paintings; then identifies the mulatto movement of "undoing" the Ideal in the wars that shook the nineteenth-century Caribbean from Haiti to Cuba, arguing that certain projects of national liberation have moved contrary to the historical claims to freedom in the mulatto world.

JosÃ© F. Buscaglia-Salgado is assistant professor of modern languages and comparative literature and director of Cuban and Caribbean Programs at the University at Buffalo.