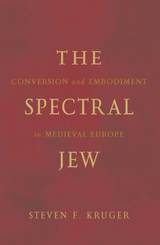 Medieval European culture encompassed Judaic, Christian, Muslim, and pagan societies, forming a complex matrix of religious belief, identity, and imagination. Through incisive readings of a broad range of medieval texts and informed by poststructuralist, queer, and feminist theories, The Spectral Jew traces the Jewish presence in Western Europe to show how the body, gender, and sexuality were at the root of the construction of medieval religious anxieties, inconsistencies, and instabilities.

Looking closely at how medieval Jewish and Christian identities are distinguished from each other, yet intimately intertwined, Kruger demonstrates how Jews were often corporealized in ways that posited them as inferior to Christians—archaic and incapable of change—even as the two mutually shaped each other. But such attempts to differentiate Jews and Christians were inevitably haunted by the knowledge that Christianity had emerged out of Judaism and was, in its own self-understanding, a community of converts.

Examining the points of contact between Christian and Jewish communities, Kruger discloses the profound paradox of the Jew as different in all ways, yet capable of converting to fully Christian status. He draws from central medieval authors and texts such as Peter Damian, Guibert of Nogent, the Barcelona Disputation, and the Hebrew chronicles of the First Crusade, as well as lesser known writings such as the disputations of Ceuta, Majorca, and Tortosa and the immensely popular Dialogues of Peter Alfonsi.

By putting the conversion narrative at the center of this analysis, Kruger exposes it as a disruption of categories rather than a smooth passage and reveals the prominent role Judaism played in the medieval Christian imagination.

Steven F. Kruger is professor of English and medieval studies at Queens College and the Graduate Center, CUNY. He is author of several books and editor with Glenn Burger of Queering the Middle Ages (Minnesota, 2001).
TABLE OF CONTENTS