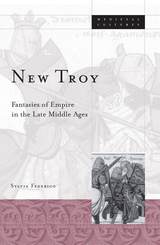 Examines the political and literary uses of the Trojan legend in the medieval period.

England in the late fourteenth century witnessed a large-scale social revolt, a lingering and seemingly hopeless war with France, and fierce factional conflicts in royal politics and London civic government--struggles in which all parties sought to justify their actions by claiming historical precedent. How the Trojan legend figured in these claims--and in competing assertions of authorial legitimacy, nationhood, and rule in the later Middle Ages--is the complex nexus of history, myth, literature, and identity that Sylvia Federico explores in this ambitious book.

During the late medieval period, many European political and social groups took great pains to associate themselves with the ancient city; the claim on Troy, Federico asserts, was crucial to nationhood and was always a political act. Her book examines the poetry and prose of several late medieval authors, focusing particularly on how Chaucer's use of the Trojan legend helped to set the terms by which the Ricardian and Lancastrian periods were distinguished, and further helped to establish English literary history as a noble precedent in its own right. Federico's book affords remarkable insight into the workings of the medieval historical imagination.

Sylvia Federico has taught at Washington State University and the University of Leeds. She currently lives in Maine.