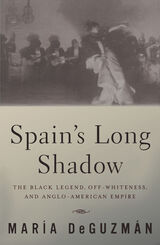 England and the Netherlands, Spain's imperial rivals of the sixteenth and seventeenth centuries, imagined Spain as cruel and degenerate barbarians of la leyenda negra (the Black Legend), in league with the powers of "blackest darkness" and driven by "dark motives." In Spain's Long Shadow, Maria DeGuzman explores how this convenient demonization made its way into American culture - and proved essential to the construction of whiteness. DeGuzman's work reaches from the late eighteenth century - in the wake of the American Revolution - to the present. Surveying a broad range of texts and images from Poe's "William Wilson" and John Singer Sargent's "El Jaleo" to Richard Wright's "Pagan Spain" and Kathy Acker's Don Quixote, Spain's Long Shadow shows how the creation of Anglo-American ethnicity as specifically American has depended on the casting of Spain as a colonial alter ego. The symbolic power of Spain in the American imagination, DeGuzman argues, is not just a legacy of that nation's colonial presence in the Americas; it lives on as well in the "blackness" of Spain and Spainards - in the assigning of people of Spanish origin to an "off-white" racial category that reserves the designation of white for Anglo-Americans.By demonstrating how the Anglo-American imagination needs Spain and Spainards as figures of attraction and repulsion, DeGuzman makes a compelling and illuminating case for treating Spain as the imperial alter ego of the United States. Cross-cultural and interdisciplinary, ambitious in its chronological sweep, and elegant in its interpretation of literary and visual works, DeGuzman's book leads us to a powerful new understanding of the nature - and history - American ethnicity.
AUTHOR BIOGRAPHY
Maria DeGuzman is assistant professor of English and director of Latina/o studies at the University of North Carolina, Chapel Hill.
TABLE OF CONTENTS