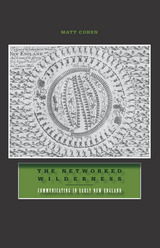 In The Networked Wilderness, Matt Cohen examines communications systems in early New England and finds that, surprisingly, struggles over information technology were as important as theology, guns, germs, or steel in shaping the early colonization of North America. Colonists in New England have generally been viewed as immersed in a Protestant culture of piety and alphabetic literacy. At the same time, many scholars have insisted that the culture of the indigenous peoples of the region was a predominantly oral culture. But what if, Cohen posits, we thought about media and technology beyond the terms of orality and literacy?

Reconceptualizing aural and inscribed communication as a spectrum, The Networked Wilderness bridges the gap between the history of the book and Native American systems of communication. Cohen reveals that books, paths, recipes, totems, and animals and their sounds all took on new interactive powers as the English negotiated the well-developed informational trails of the Algonquian East Coast and reported their experiences back to Europe. Native and English encounters forced all parties to think of each other as audiences for any event that might become a kind of "publication."

Using sources ranging from Thomas Morton's Maypole festival to the architecture of today's Mashantucket Pequot Museum and Research Center, Cohen shows that the era before the printing press came to New England was one of extraordinary fertility for communications systems in America.