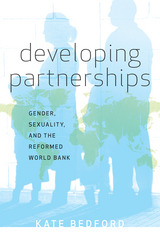 A nuanced critique of how the World Bank encourages gender norms through its policies, Developing Partnerships argues that financial institutions are key players in the global enforcement of gender and family expectations.

By combining analysis of documents produced and sponsored by the World Bank with interviews of World Bank staffers and case studies, Kate Bedford presents a detailed examination of gender and sexuality in the policies of the world's largest and most influential development institution. Looking concurrently at economic and gender policy, Bedford connects reform of markets to reform of masculinities, loan agreements for export promotion to pamphlets for indigenous adolescents advising daily genital bathing, and attempts to strengthen institutions after the Washington Consensus to efforts to promote loving couplehood in response to economic crisis. In doing so, she reveals the shifting relationships between development and sexuality and the ways in which gender policy impacts debates about the future of neoliberalism.

Providing a multilayered account of how gender-aware policies are conceived and implemented by the World Bank, Developing Partnerships demonstrates as well how institutional practices shape development.

AUTHOR BIOGRAPHY
Kate Bedford is a research fellow at the AHRC Centre for Law, Gender, and Sexuality at Kent Law School, the University of Kent.
TABLE OF CONTENTS